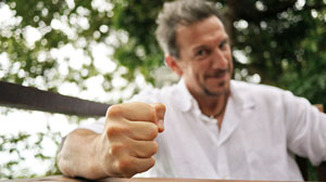 WingChun is a self-defence system. Contrary to expectations, the WingChun fighter actually attacks in self-defence. From early on WingChun Students learn a highly developed strategy and approach, with which they can control all conceivable attacks, and it is thus insignificant in what manner or how strongly an opponent attacks. In my system, differences such as gender and size do not even play the slightest role. The stress, familiar to every martial arts "sportsman," which leads one to have to react to "fake" or falsely interpreted attacking movements, drops away completely.

WingChun trains for every possibility that could possibly happen during a real defence situation. The simultaneous deployment and functioning of the hands, arms and legs are practiced within the framework of organized combat programs, even at the elementary level. The employment of the eyes and quick "reading" of the opponent is also a fundamental part of the WingChun lesson. Timely and exact perception is extremely important at the beginning of a defence situation, and thus in the first combat programs the WingChun student learns how to "read" specific attacks, right up to actual contact. Only in this way can the entire body function as one unit, and the WingChun fighter is then in a position to end a defence situation within a few seconds.

WingChun fighters are trained to be specialists in self-defence at all distances. Physical requirements play a secondary role in this art of self-defence. Because of the highly developed understanding of contact and collision developed through Chi Sao (adhering arms) training, WingChun fighters can immediately adapt to any possible attack. The Chi Sao strengthens the muscles as well as the ligaments and bones. Furthermore Chi Sao trains one to think and act in combination. It identifies and trains various scenarios of contact with the opponent's arms, the goal being to free oneself as quickly as possible in order to proceed to a rapid counter attack. One begins, so to speak, with a contact situation - Chi Sao practice - in order to learn how to free oneself from this contact (the opponent's arms) as quickly as possible.

The most important rule in WingChun, and consequently the goal of Chi Sao training, is, in a logical way, not to remain sticking. Thus through the combination of the combat programs and Chi Sao training - and of course the forms, which perfect the implementation of each individual movement - an explosive and perfect mixture comes into being which transforms the WingChun student into someone who is highly functional and capable of defending him or herself with above average reaction speed. Even after only a short amount of time, all parts of the body can react immediately and even independently of one another. Information paths are minimized, and this gives the WingChun fighter the possibility to quickly unmask (as useless play) the often employed "fake" manoeuvres. There are no defence techniques in WingChun; in a defence situation we are concerned solely with the counterattack, that is to say, with one's own action. WingChun fighters respond according to the threat level of the current situation, yet WingChun does not partake in any absurd, martial arts sporting events and carefully avoids any rules or regulations, as these would only lead to a drastic limitation on one's ability to defend his or herself.

In spite of the realistic way of training, a distinctive feeling for one's own body, together with a traditional and responsible way of practicing, prevents injuries during class.

WingChun - a unique system, developed by Grandmaster, Sifu K. Brand, was completed in 1998 . On an individual and intensive path you will discover your possibilities and potential and arm yourself for dangerous situations, and newly acquired, real capabilities will strengthen your self-confidence. WingChun is the basis for your further development, which you yourself can freely and confidently determine. With WingChun you will learn both to defend and to assert yourself. Create freedom and independence by developing your abilities. For freedom is a fundamental right which makes our life really worth living, and any type of restriction leads to a limitation of our possibilities and achievements and in the end will cost us our health.
Learn to defend yourself. Call us to make an appointment for a trial lesson in one of our academies. There you can expect trained WingChun instructors who will help you to realize your aspirations.