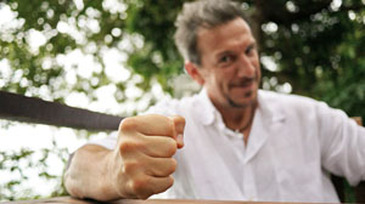 1. WingChun has two types of attack: the attack to the body of the opponent (primary objective) or, first of all, to his arm position.
2. Defence is an attack against the attacking arms or legs of the opponent.
3. In combat there is always an Attacker and a Defender. The Defender must first repel the attack. A trained WingChun practitioner determines whether he can attack directly or must defend first and then attack. Directly responding to an attack (to the body) with a counter-attack (to the body) can be described as a combative disaster.
4. Engage in Self-Defence without hesitation as soon as the Main Distance is reached. If the opponent initiates the attack you must first attack his attack (to defend) and then his body (to attack).
5. Attack from the outside or at an angle if possible and avoid attacking straight from your body midline because this is too easy to defend. Attacks from the outside cannot be ignored or displaced and can only be stopped with trained skill. You can attack straight only when the opponent displays no credible threat.
6. Never maintain contact with the arms of your opponent. Maintaining contact in combat is equivalent to stopping and is due to a technical misunderstanding.
7. Always use all of your available power to defend and to attack.
8. Never defend and attack at the same time. The defence and attack each require your full attention. If you are attacked you must put your energy into the defence and only when this succeeds can you start the attack.

1. If you think you are too weak, you are.
2. Learn to believe in yourself and trust your teacher.
3. Always improve your technical knowledge and therefore your physical and mental flexibility.
4. Work on the power of your technique because only technical power is usable power and is decisive in combat.
5. Work on your speed without sacrificing power. Technique, power and speed are the cornerstones of WingChun.
6. Work on toughening your arms with steady and dynamic training.
7. Never let yourself be influenced by the movements of your opponent and never yield.
8. The exchange between defence and attack, as well as an understanding of the two combat distances of WingChun, is the basis of Self-Defence and all of our training programmes.
9. To fight you must have continual tension. Relaxed muscles are useless in combat.
10. Combat is not harmony. Do not fight if you do not have to. If you have to defend yourself, harmony returns only after the quick and successful end of combat.
11. The purpose of Self-Defence is to protect yourself, so do not spare your attacker whilst defending yourself.
12. Learn to defend yourself, to protect yourself from attacks that could endanger your health.

Leader of the International Academy of WingChun